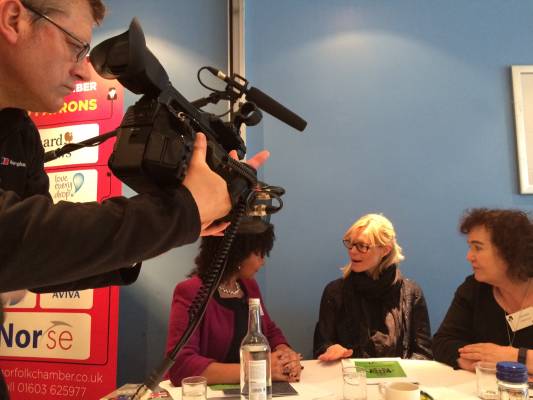 Rachel Blackburn is to be featured in an Open University Massive Open Online Course (MOOC) about the benefits of networking after an intensive day of filming on Tuesday 10th May.

After welcoming a film crew from Evans Woolfe Media in London to the US2U Consulting head office for one-to-one filming, we then went on location to the Norfolk Chamber of Commerce's Doing Business in Dubai conference on the outskirts of Norwich to witness networking in practice.

The day finished at the University of East Anglia's Enterprise Centre where Rachel was a Young Enterprise judge to determine which of their companies would progress to the national finals in London. Filming was concluded with the importance of an elevator pitch - shot in an actual Enterprise Centre elevator!

The MOOC is titled Business Fundamentals: Effective Networking and can be accessed through the Open University's Future Learn platform.